Combat is the core of Call of War's gameplay and usually happens when two hostile armies meat eachother on the map, or when an army enters a foreign province. Conquering provinces and fighting other armies is essential to winning the game and is encouraged. Below we will explain some of combat's basic concepts and also provide more advanced knowledge how combat results are calculated.

Allied nations can move through eachother's provinces without the provinces being conquered. A diplomatic relation of Right of Way, Shared Map or Shared Intelligence is required for that.

If armies of multiple nations attack the same province, then the army which deals the final blow on the defending army will conquer the province. If the province is empty, then the nation which arrives first at the province conquers it.

Combat is triggered when one army attacks another army. During combat damage is exchanged every 30 minutes, and combat cycles through the following phases:

In speed game rounds the combat cooldown can be faster, as this value refers to ingame time. It is also possible that both armies attack each other, in which case two combat cycles with all 4 phases would happen simultaneously (as explained in the sections below), thus speeding up the resolution of the exchange.

Combat can be initiated differently and also play out differently depending on which unit types are participating in the battle.

Melee combat (close combat) is triggered when 2 armies are within close combat range of each other on the map.

When armies enter melee combat they are locked in combat until one side is defeated.

Melee combat is not triggered when:

Ranged combat is triggered when the range circle of a ranged army overlaps with the target on the map. Idling ranged armies also initiate combat automatically if an enemy army enters their attack range circle. Due to latency such ranged combat might also be triggered with a small delay.

Armies in ranged combat are not locked in battle and are free to abort the combat by moving away.

The start of ranged combat also depends on the fire control setting (High Command feature) of the ranged army:

Air combat via direct attack commands results in melee combat, with the difference that both sides are not locked in combat and that the airplane returns to its airport for refueling after one combat cycle.

Another form of air combat can be triggered via the patrol command: In this mode the airplane automatically attacks all enemy units within its patrol radius, but units are not locked in combat in this mode. This means the patrol destination of a patroling airplane can also be re-positioned anytime.

Combat values of units change depending on the combat stance of their army: Attacking or Defending. The values for both stances are listed in the unit details panel as well as in the army info panel, opened via the info button in army interface after selecting an army.

The time between aircraft attacks varies based on the map distance between target and airfield as well as the airplane speed.

Every 15 minutes the patrolling aircraft deals 50% of its attack damage to all enemy units within its patrol radius, and receives 50% of their defence damage in return. 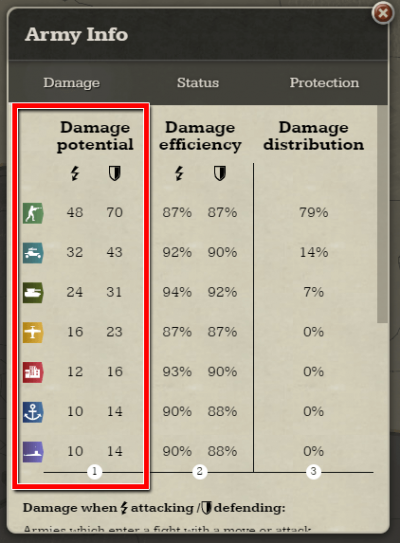 For the attacking army its attack damage potential against all armor classes is calculated.

For the defending army its defence damage potential against all armor classes is calculated.

The damage potential is an indicator how much damage the army could deal against each armor class in an ideal scenario. The final damage however depends on the enemy army composition and damage reduction modifiers (see sections below).

The damage potential is calculated by multiplying the base damage values of the unit type with the unit amount, the terrain modifiers, the home defence bonus and the damage efficiency (see section below).

The damage potential is also increased or reduced by a random value between -20% and +20%, in order to simulate altering circumstances on the battle field. This random factor is rolled again with each combat round. 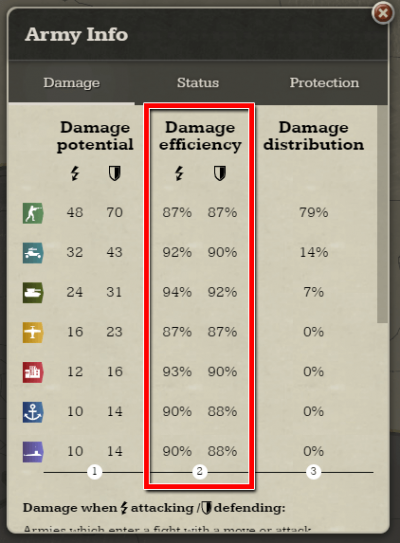 The order in which damage is exchanged and afterwards distributed and applied depends on the combat type: 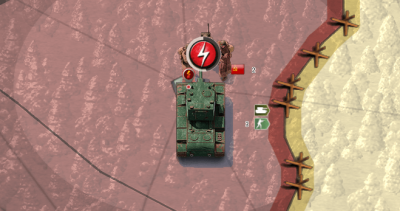 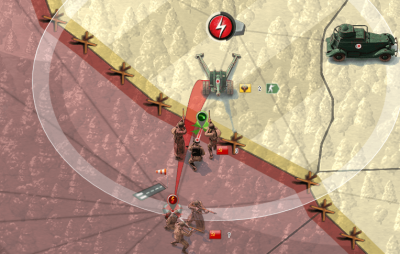 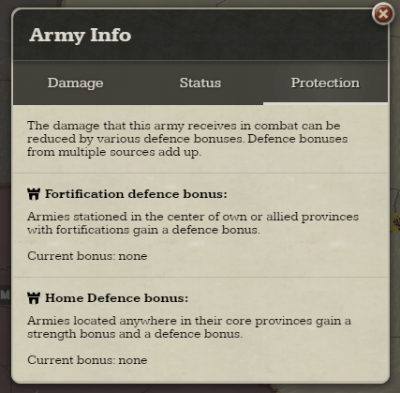 The calculated damage is reduced before being applied to the receiving army, if one of the following criteria is met:

The percentage value of the protection is multiplied with the incoming damage values to determine the reduced damage values.

More information on the current damage reduction can be seen in the protection tab in the army info popup, which can be accessed via the info button in the army interface. 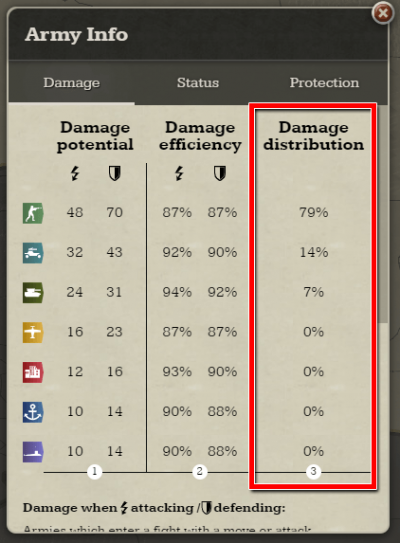 Within each armor class, the damage each unit type receives is based on the share of unit types within that class.

The last phase of a combat round is the distribution of the damage to the various unit types within the army (see damage distribution above). The incoming damage is then spread evenly among units of the same type.

When damage is applied, there is a check if units of that unit type are destroyed. Units can be destroyed once the hitpoints for the whole unit type drop below 50%.

Province morale and province buildings can also take damage when the province is directly attacked or when an army is attacked in direct vicinity of the province center. The damage dealt to the province's morale and buildings is calculated separately of the unit combat, thus one cannot affect the other.

The damage dealt to the province's morale or to the province’s buildings is determined by the attacking army's morale damage value or building damage value respectively. Similar to unit combat there is a +-20% random factor induced into the calculation. Only full morale percentage points and only full building hitpoints can be removed. If the attacking army deals less than 1 point of damage, a random roll determines if 1 point of damage is applied or not.